A Wedding On a Budget | “Once I Was Engaged” Review 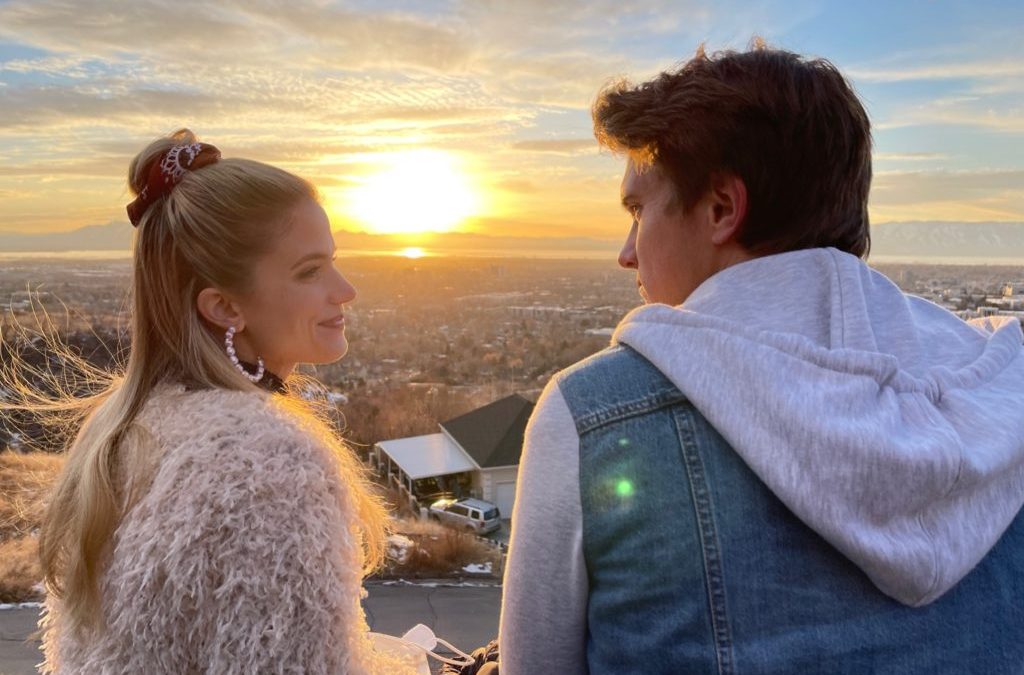 This is a low budget comedy that comes with all the cheesiness you can expect for a movie intended for a niche audience, but it is unexpectedly insightful.

Bree Carrington (Clare Niederpruem) had the next few years of young adulthood all planned out. She would be wrapping up the semester at her dream school–BYU Hawaii–studying marine biology, and then go on a church mission for the next 18-months. That plan was flipped upside down when her boyfriend of 6 months, Thys Chesterfield (Tanner Gillman), suddenly asked her to marry him. After convincing Mama Bear Carrie (Lisa Valentine Clark) to get on board with the engagement, the Carrington family is fully invested in putting together the perfect wedding in two months.

The money side of it might be the most distracting so I’ll cover that first. This movie required a lot more money and flexibility than the first in the series, “Once I Was a Beehive.” One huge factor was that it was shot during the pandemic which made it a lot harder to fill in the scenes with the larger cast they had this time around.

Also, they did a lot to make this film more spectacular. The scenes in Hawaii were beautiful, but required a decent amount of money to send the cast and crew there under new health and safety requirements. They also basically put together an entire wedding with the necessary costumes and sets. These expenses make the movie suffer in a couple of ways, primarily with the casting of minor characters who didn’t quite nail their lines like the leads, and there are times the look of it isn’t as stunning. Yet these were the trade-offs they had to make and I don’t think it takes away from this must-watch story.

Another thing that was somewhat off-putting was the amount of product placement. It makes sense in comparison with the last movie for a story about a wedding to be more materialistic than one about a camping trip, so the product placement blends in with the story. It also served as a plus for their filming locations, because this movie does a great job showcasing BYU Hawaii, the Polynesian Cultural Center, and our very own Utah County. This movie serves as a love letter to those locations.

The Comedy Side vs The Serious Side

The humor in this film is very much like how it was in “Once I Was a Beehive”–good old self-aware “mormon culture” jabs. I was laughing the whole time with all the jam-packed vocabulary and references thrown in. There is surprisingly deep characterization that makes these characters so enjoyable and loveable. Coming from being the (sort of) antagonists of the previous film, the way Niederpruem and Clark play their imperfect characters highlights their growth and strengths. Their male counterparts, the fiancé and Bree’s dad (Bart Johnson), were also particularly fun to see juxtaposed with the high-strung leading ladies.

But between all the crazy shenanigans and relatable jokes, there is a very meaningful story being told here. More than anything, the story of Bree and Thys’s engagement covered a lot of important ground when it comes to getting married. It shows that there’s a lot more stress and hard work that goes into the Big Day than what is commonly portrayed in the media. There’s fantastic modeling of crucial conversations everyone should have during an engagement, from the couple who are now needing to plan their lives together, to all the involved parents and past loves. The movie doesn’t have a “villain,” but the conflicts that arise emphasize the gravity of how life altering marriage is in ways that this specific culture sometimes fails to show in a realistic way.

If you are a teen or young adult LDS girl and/or you enjoyed “Once I was a Beehive,” this will be a great pick for you. The moral of the story, I think, is especially vital for those in the targeted demographic to learn prior to getting wrapped up in their own engagement. There’s still plenty for all the fellas out there to enjoy as I will prove by concluding with a few of my husband’s remarks that I noted throughout the film. I think he was even more invested in the story than I was.

“It’s ‘To All the Boys I Loved Before’ in the Church of Jesus Christ of Latter-day Saints!”

“Awww these cute people make me want to vomit a little…”

“This is so wholesome. I can’t wait for it to all go downhill!”

“The dad is my favorite character, calling it now.”

*Holds head in hands, shaking it and groans* “no no no”

“Because you’re insane, that’s why you’d do that!”

“Alright, she won me over.”

This is a lesser known release, so if you want to have a fun time in a fairly empty theatre and support local film projects, I personally recommend this as a great movie date, especially for younger couples.

This is a very clean, safe movie for the whole family besides the occasional PG innuendo and shirtless surfer dudes.