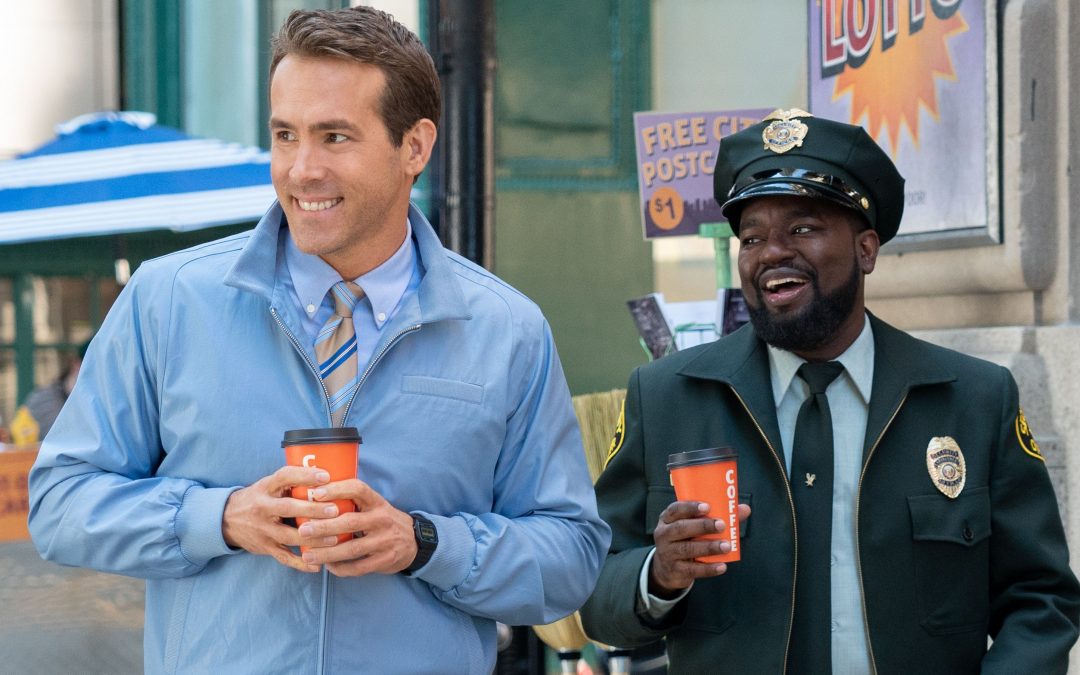 Shawn Levy’s “Free Guy” feels like a cross between a live-action “LEGO Movie” and the original “Tron.” If you consider yourself a gamer or a tech geek, you should be golden; but even if not, as long as you can roll with the nerd flow, it’s a good time.

The plot follows a glassy-eyed rube who discovers that he’s living inside a video game. Smiley bank teller Guy (Ryan Reynolds) couldn’t be happier with his life in Free City. Even when an armed robbery occasionally interrupts his daily routine, Guy’s sunshine personality oozes through his every interaction, whether getting coffee or shooting the bull with his best friend Buddy (Lil Rel Howery), the bank’s security guard.

Thing is, robberies are one of the more mundane things one might encounter on a stroll through Free City. Helicopter attacks, high-speed chases, and lots of gunfire and explosions are a constant presence on city streets, and they all seem to be connected to the “Sunglass People,” men and women of action Guy sees as local heroes.

Things get going once Guy spots Millie (Jodie Comer)—one of the chosen Sunglass People—and is instantly smitten. Hoping to communicate with her, Guy nabs a pair of sunglasses of his own, and realizes he’s living inside a virtual game environment.

That’s the good news. The bad news is that he’s an NPC (Non-Player Character), a perpetual innocent bystander who merely serves to flesh out the world the real players—the Sunglass People—get to manipulate.

Out in the real world, we learn the significance of Guy’s breakthrough. Millie is actually an advanced coder, and she’s trying to find evidence in Free City that will prove the game’s creator stole her work. With a little help from her partner Keys (Joe Keery of “Stranger Things”), they discover that Guy—the world’s first artificial intelligence—may be the key to more than a legal settlement.

The concept is a close riff on the plot to 1982’s “Tron,” and Reynolds seems to be playing a live-action version of Chris Pratt’s Emmet character from 2014’s “LEGO movie,” but as long as you can keep up with the technical gamer lingo—or just learn to ignore it—“Free Guy” is a lot of fun.

While its primary objective is enough good laughs and CGI-enhanced action to keep audiences happy, “Free Guy” has just enough of a philosophical foundation to keep things interesting. The characters in “Tron” were all visitors from the real world, but Guy has to wrestle with the question of his own existence, and as we learn about the origins of the character, the film manages to extract a bit of a romantic subplot along the way.

“Free Guy” also offers a sly commentary on gamer culture, at least on the first-person-shooter, Grand Theft Auto variety. Once Guy joins the Sunglass Culture, he spurns their quest for mayhem, and instead uses his insider powers to distinguish himself as a “good guy” in the midst of a hedonistic world.

Reynolds, of course, is a perfect fit for Guy, and there are plenty of other familiar faces to enjoy, including director Taika Waititi (who plays the villainous real-world game magnate Antoine), and longtime “Jeopardy!” host Alex Trebek, who appears in his last on-screen role.

“Free Guy” isn’t quite original or striking enough to merit high praise, but as a knowing nod to a real world that often feels like a video-game like, Levy’s effort should make you smile.