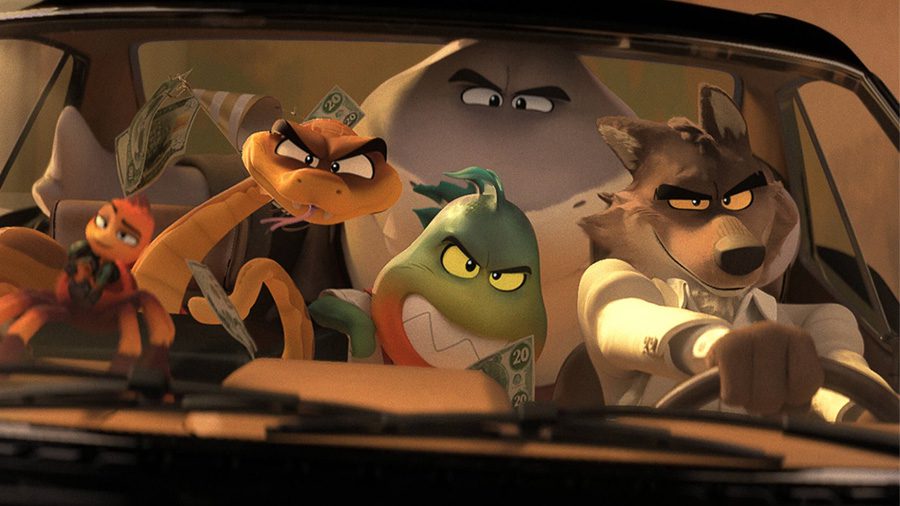 The Bad Guys are a gang of animal thieves led by Wolf (Sam Rockwell) who have embraced their reputation for being bad. They appeal to Governor Diane Foxington (Zazie Beetz) to give them the chance to reform as a guise for a bigger heist. However, through these newly presented opportunities, will they find they prefer the good life, or will they remain bad to the bone?

This movie had SWAGGER from the animation to the voice acting to the overall movement and feel. I loved this style and it served the film very well because it made for an interesting, well-thought out story that every good caper should have. Each anthropomorphic character fits their roles in appearance and voice, making them surprisingly convincing in a mostly human society.

While the names tied to this film are well known, I like how the voicing talent and abilities were prioritized over having the very top A-list actors. You don’t hear the actor so much as you hear the character they are portraying. My favorite part of watching this was seeing how these characters fit into this world, pretending to be human but using their animal characteristics to give them a dishonest advantage. You really grow to like these devious villains.

While maintaining good quality, the movie is also very self-aware of the fact that it is combining heist tropes with expected lighthearted kid humor inspired by animals. There are definite plot holes with how these criminals are able to actually fool the human/animal population like they do, but that’s the point. The beauty of animation is how it can suspend disbelief, working quite well with implausible heists. Leaning into the absurd is what makes this fun for the adults. They don’t cheap out with simple nods or sly crude jokes, but they give intentional winks at the fact that we all know how silly this is and what they are copying, which only made this movie funnier.

I feel very weird saying this, but this movie is basically “Zootopia”… but better. They kept all the things I liked about that movie with the great animation and creating an interesting world with anthropomorphic animals, but “Bad Guys” added way more nuance to the shady predator idea. Clearly, this is still a kid’s movie so there are a lot of predictable moments, but they feel more satisfying than contrived. Unlike recent Disney additions, this movie had a perfectly wrapped up ending that teaches a morally sound, complete lesson while not being too preachy. I think parents will find it very refreshing.

My one gripe with “Bad Guys” is how it dumbs down occasionally. It seems like these studios can’t resist potty humor even when, in a movie like this, they seem so out of place. Other moments were a little more spelled out than necessary, but perhaps that is mostly to serve the actual target demographic. The plot is certainly clever and in some instances, they trust you to pick up on details, so, again, falling back on explaining with dialogue feels out of place in those other dumbed down moments.

Overall, I think this was a high quality flick with enough visual and sound details to justify a theater viewing as well as the perfect amount of characterization and lessons that would make a family want to add this to their home collection.

This is a very safe film to watch with nothing to worry about with action, language, or inappropriate content. There are some chase sequences that are far more zany than intense. Considering my issue I stated before, prepare for many overextended fart and butt jokes.