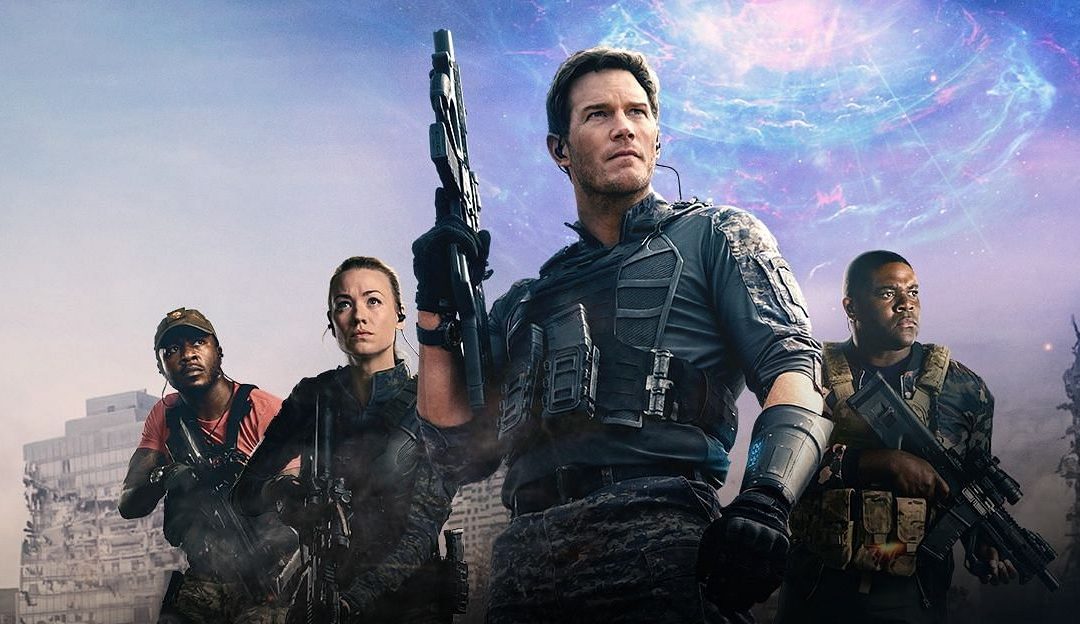 An army from 30 years in the future comes to recruit people in the present, as humanity’s last chance to fight in a seemingly hopeless war with alien invaders. Ex-military biology teacher, Dan Forester (Chris Pratt), is torn from his family and enlisted to spend seven days fighting in this future war. While his particular skill set is a valuable asset to the war effort, he also gains the opportunity to heal the past and fix the future of his personal life in the process.

I was so impressed with the writing. This is much more than a mindless straight action movie. In fact, it’s hardly an action movie in some ways (although, don’t worry, there is still plenty of violence). The movie was surprisingly quippy and realistic, despite a very unrealistic premise. I love the heart of the family-centered themes that were tied together nicely with effective parallels, foreshadowing, and world building.

While I loved the whole cast and their performances, I think the emotion in the writing was strongest with Chris Pratt, J.K. Simmons, and Yvonne Strahovski’s characters. There are interesting ideas of note with history repeating itself and veteran stresses. Although the wife (Betty Gilpin) doesn’t have a very prominent role, her character also adds a lot to the family dynamic. I hear a lot of critiques that these characters are bland, but the more you really pay attention to the action, listen to that dialogue and notice the details in the background, the more you see how fleshed out these characters are.

Like I said, the rest of the cast was fantastic. This is the only circumstance where we would ever see normal people in battle, but director McKay put in a lot of deliberate effort to show a realistic cast who felt like genuinely real people. A lot of the supporting characters have ties to the TV series “24” and other similar saving-the-world kind of programs which also helps build this world that needs to be saved.

Unfortunately all the good things with the premise came with a heavy set of issues. For one, like any time travel movie, you start thinking up your own questions and objections to what you are seeing. They do make some intentional decisions that prove that they put in thought to how their rules of time travel should work, but there is one moment in particular that served as a transition to a new conflict that really bothered me. A transition into the FIFTH ACT by the way because this plot dragged on.

The editing is my first point on how it looks like post-production wrecked this movie. Even though many of the scenes and characterization were written very well, the way all of it was stitched together is so odd to me. The movie begins with a flash forward to when Dan goes into the future–a very chaotic scene–that padded the runtime when it certainly didn’t need that. After a few minutes of that, we go to Dan’s normal life where things seem to not be going his way career-wise, only to go to chaos a couple of minutes later with his recruitment. By chaos, I mean the shots are cut to be quick and short which I believe is done intentionally to show the chaos of war, but it left me confused during important plot points. I started nitpicking plot holes out of frustration.

In action sequences, we get so many unnecessary added shots that, again, lengthen the runtime. I like just about all of the plot points that were hit, but the fast moments were too fast and the short ones way too slow. This should have been cut cleaner with only what was necessary, so I would pause the movie after what I thought was the climax and then notice with dread that there were still 45 minutes left…

My other disappointment with post-production was the CGI. A lot of thought went into the directing and cinematography, but that didn’t save the gross looking after effects put in. There’s no way it would have looked decent on the big screen!

The futuristic tech is so strange to me. This must be the most well-financed apocalypse. The guns were particularly distracting. Perhaps I don’t watch enough action movies, but I’ve never seen machine and handheld guns look so explosive every time they go off. Also, this must have been for the sake of cinematic lighting, but there are many fires and embers that appear on screen with nothing to clue us in of how they came to be besides spontaneous combustion.

The aliens were also very strange looking to me. Yes, they are supposed to be icky and scary, but I didn’t care for that design. I think they should have either had a greater presence in the movie where there isn’t the expectation for you to be scared or take them seriously, or they should have made their appearances less frequent, maybe in the dark, to make them more mysterious and freaky. Considering the final showdown, the first option might be the better choice and cutting some of the tension building shots would have also helped with the pacing.

I think it was smart of Paramount to sell this film to Amazon. It could have been the next big alien franchise, but skipping a theatrical release and having a finished product that’s obviously not fit for that, dashed that possibility. There is still potential that can be revisited in sequels, but for now, the movie is where it belongs.

That being said, considering that I was able to sit comfortably at home and watch it for free with my Amazon subscription, it was worth the cost, and somewhat worth the time. I also liked it a lot more on a second viewing because I was less confused and I knew the end enough to pick up on things that happened in the beginning. There are some very strong, good elements in this movie, so if you have two and a half hours to kill, this may be a fun one for you to enjoy.

The violence is pretty brutal. It isn’t blatantly gorey and bloody, but aliens and humans alike are frequently obliterated in the distance (more with the former than the latter). There is a scene where bodies fall from the sky, hit buildings, and crash to the ground in a way that is a little more disturbing than a usual action flick. Of course, the aliens are freaky looking and action sequences with them are intense since they are so much stronger than the humans. There is also the expected PG-13 language but it is generally used in a more believable than crude way, with one F-bomb thrown in that isn’t very noticeable. No nudity or sex, but it is definitely a movie made more for teenagers and adults.

Hmmm… a bit of a bummer that this one didn’t pan out as well as the trailers made it look. Chris Pratt and Sci-fi is an immediate draw for me and my wife, but we’ll have to see if we ever get around to this one. If it comes out on DVD, I’m sure we’ll rent it from the local place (don’t have Amazon Prime, so that option is out haha).