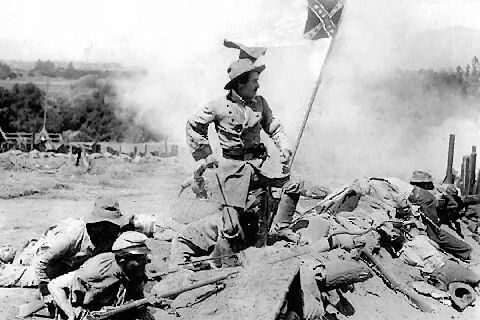 Somewhere after 1905 unveiled 5-cent Nickelodeons and before 1929 introduced the world to its first official Academy Awards, movie director D.W. Griffith had an idea.

What would happen, he likely wondered, if you were to take a controversial novel, an obscene amount of money (roughly $110,000 in 1915), a boatload of resentment, and fold that into a single, aggressively marketed summer blockbuster titled “The Birth of a Nation?”

Would that be enough, he may have continued wondering, to be “perhaps, the most profitable film of all time” according to the Encyclopedia Britannica?

In Griffith’s case, the answer was “absolutely.” In fact, not only would Griffith’s idea go on to be obscenely profitable, but it would also cement itself into film history as one of the most influential and brilliantly directed movie masterpieces ever.

What Griffith probably didn’t anticipate was that in addition to wowing even modern audiences with his filmmaking techniques and revolutionary marketing strategies, his work would go on to be considered one of the most loathsome movies ever created.

Today, directors like Spike Lee, Quentin Tarantino, Justin Simien and Nate Parker take swipes at “The Birth of a Nation,” highlighting both its horrifying message and lasting influence.

Tarantino was quoted by “The Root” as saying “You have to understand, I’m obsessed with ‘The Birth of a Nation’ and its making.” He then went onto explain, “Thomas Dixon Jr. and D.W. Griffith, if they were held by Nuremberg Laws, they would be guilty of war crimes for making that movie because of what they created there.”

Lee’s “BlacKkKlansman,” which was released a year ago this weekend, features a prominent scene where members of the KKK watch “The Birth of a Nation” and wildly cheer on its racist heroes. Those moments are intercut with a scene in which another character tells a horrifying true story of the lynching of a black man — which happened around the time of the 1915 release of “The Birth of a Nation,” according to Screencrush.

Here’s an overview of why this old-time silent movie was so influential, and why its message has been causing protests and riots since its original release.

Technically perfect or groundbreaking cinema is just white noise if it doesn’t weave its way into the conversation of its time.

For Americans in 1915, parents and grandparents remembered where they were when President Abraham Lincoln was shot. For the South, homes, lives, economic stability, pride and in many ways southern culture were all casualties to both the Civil War and Southern Reconstruction.

These topics would have been especially sensitive to Griffith, who was the son of a Confederate States Army colonel. Growing up in the Griffith home likely included regular first-hand accounts of the war from an antagonistic perspective.

So when Griffith was given Thomas Dixon Jr.’s novel “The Clansman,” which is every bit as terrible as the title suggests, the very disturbing courtship of talent and hate was ignited.

Dixon Jr. created a story in which, as filmsite.org points out, the “KKK (are portrayed) as heroes and Southern blacks as villains and violent rapists and threats to the social order.” The finale of the film includes the KKK riding in on horses triumphantly to save the town from “black mobs” and Union soldiers.

The film was met with fierce controversy around the country, which fueled its profit margins but also caused riots and protests in multiple cities.

It was also used as a propaganda film for the KKK, and as History.com points out, “Until the movie’s debut, the Ku Klux Klan, founded in 1865 by Confederate veterans in Pulaski, Tennessee, was a regional organization in the South that was all but obliterated due to government suppression. But ‘The Birth of a Nation’s’ racially charged Jim Crow narrative, coupled with America’s heightened anti-immigrant climate, led the Klan to align itself with the movie’s success and use it as a recruiting tool.”

The movie also ignited censorship debates, which influenced Griffith’s next film, “Intolerance: Love’s Struggle Throughout the Ages.” According to Britannica, “Almost unanimously, critics have hailed ‘Intolerance’ as the finest achievement of the silent film.”

While “Intolerance” is praised as the finest silent film, filmsite.org points out “Film scholars agree… (“The Birth of a Nation”) is the single most important and key film of all time in American movie history.”

Charlie Chaplin is quoted as saying of Griffith, “He was the teacher of us all.”

So, what does that mean in quantifiable influence and contribution?

The list of techniques credited to Griffith is long and listed out in detail at Filmsite. It should be noted, however, that several of the specific claims have been contested over the years, so maybe it’s safe to just say his most important contribution is his influence on the moviegoing experience in general.

The next time you’re sitting in a darkened theater enjoying a long, cinematic story timed to glorious music with complex staging and interactions, that’s Griffith’s influence.

As the Hollywood Reporter notes, “he was the first American director to fluently integrate the language of cinema to create an entire ‘evening’s entertainment.”

That said, it’s probably important to note you’ll hear Griffith’s name, especially in relation to “The Birth of a Nation” attached to “moving, traveling or ‘panning’ camera tracking shots,” “the use of fade-outs and cameo-profiles,” “high-angle shots and the abundant use of panoramic long shots,” “the technique of the camera ‘iris’ effect, the definitive usage of the still-shot,” and many, many others, according to Filmsite.

The New Yorker film critic Richard Brody stated, “The worst thing about “Birth of a Nation” is how good it is.” That may be true, but it could also be said we’re better off because of the reminder it gives us.

In that way, “The Birth of a Nation” remains a relevant film, not only for its contributions in technical and commercial achievement but because it can shape the discussions we’re invested in: Can we separate an artist from his or her work? Should we celebrate artistic achievement in spite of its message? Should we as a society censor offensive or dangerously provocative material?

These are conversations we’re still having over 100 years after “The Birth of a Nation” was released, and I suspect on some level we’ll be enduring them 100 years from now.

With all this said, unless you’re a film student or especially interested in the controversy, “The Birth of a Nation” isn’t that classic movie you should project on your wall on a lazy evening.

A better use of your 3 hours and 15 minutes would include looking up some of the commentary from directors Lee and Tarantino. As far as viewing enjoyment goes, I’ll throw “The Birth of a Nation” in the category of “More interesting to talk about and research than actually watch.”