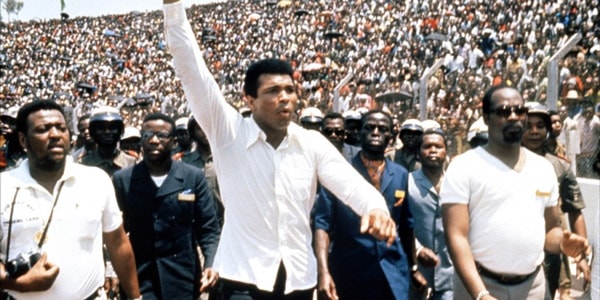 This week we have two big films for you. First, we are bringing back a classic from the 1996 Festival to honor the late great Muhammad Ali. Next, we are showing our FIRST EVER 3-D film outdoors. 3-D glasses will be provided but bring your own glowsticks and dancing shoes. Both films are free and open to the public. No ticket needed. Come join us! #SundanceLocals

This chronicle of the 1974 Ali-Foreman heavyweight boxing match uses original footage of the historic “rumble in the jungle,” which took place in Kinshasa, Zaire. The film is on one level a lost documentary: never-before-seen images of the fight of the century between a then relatively unpopular but fearsome boxer named George Foreman and his nearly mythical antagonist, the incomparable Muhammad Ali. But it’s also a riveting story of the drama and significance of the beginning of a new age of black culture and identity. This 3-D film chronicles the love, community, and life of festivalgoers during Electric Daisy Carnival Las Vegas, the largest music festival in the U.S. Behind-the-scenes footage and exclusive interviews with Insomniac’s Pasquale Rotella reveal the magic that makes this three-night, 345,000-person event a global phenomenon.

Film presented in 3-D for the first time ever outdoors! 3-D glasses provided on a first-come, first-served basis so early arrival is encouraged. Dance music will start around 8:00 pm. Costumes are also encouraged because we know you’ve been wanting an excuse to wear that neon outfit one more time!.

In the event of inclement weather, the screening will be moved to the Park City Library, 1255 Park Ave.