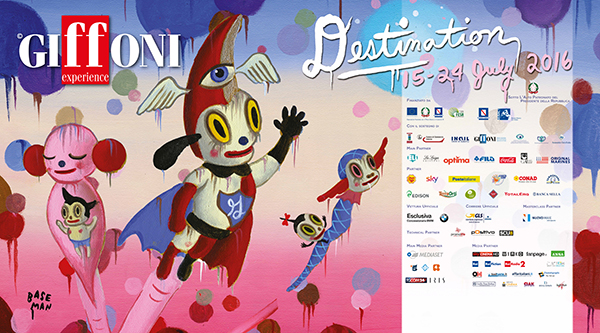 The opening ceremony of the 46th edition of the Giffoni Film Festival took place this morning, Friday July 15, at Giffoni Valle Piana Cittadella del Cinema with a spirit of deep sorrow and genuine sympathy for the Nice victims. It would have been impossible not to dedicate this edition to the memory of the many kids and youth who brutally died at the hands of crazy killers. The ribbon-cutting was attended by President of the Campania Region Vincenzo De Luca, who wished to express all his indignation: “We want to dedicate this edition – he addressed the many jurors attending the ceremony – to France, to the victims of this horrible massacre, to the kids and youth who lost their lives in the attack. This is a day of sorrow and sadness for all of us. Now more than ever sympathy stands out as the keyword of the festival”.

The ceremony was also attended by a few French jurors: Célie Chollois, Moyra Arrebot Natou, Camille Royant, Solène Leclerc, Chloé Winieski and Pénélope Douillet, who were given a floral tribute with the France flag colours: white, blue and red.

De Luca wished to send out from Giffoni a clear message of integration and sympathy, against all kinds of hate and violence: “Today – he went on – we’ve proved thatGiffoni Film Festival values are the most effective way to fight barbarity and terrorism, which aim at spreading fear and violence, as well as raising barriers and feeding hate among people. The Festival, on the other hand, is the event that brings cultures together and takes children here from dozens of countries in the world. Meeting and dialogue can and must be a chance for human and cultural growth. The answer from Giffoni, Italy and Europe is this: being open to dialogue, having perseverance in keeping open the channels of understanding and solidarity among communities. GFF is the strongest answer to terrorism and we answer to violence with the culture of welcome, creativity and solidarity. Giffoni Experience Director Claudio Gubitosi, Giffoni Experience President Piero Rinaldi and the Mayor of Giffoni Valle Piana Antonio Giuliano were present at the ribbon cutting ceremony. Gubitosi pronounced words of sympathy to France for the tragic events in Nizza: “We have chosen the way of sympathy to France for the Festival’s opening ceremony. We couldn’t do otherwise. This is the place of integration”.

Rinaldi greeted the 4150 jurors, whereas the Mayor of Giffoni declared: “We’re all shocked for what happened in Nizza. We express solidarity and grief to whole France. Since 46 years ago, here we have tried to put into action a bridge of cultural integration. We’ll do it again this year thanks to the presence of 51 countries and 170 cities. This is how we affirm the value of peace defeating war”.