Sundance: ‘We Are the Giant’ examines personal stories of the Arab Spring 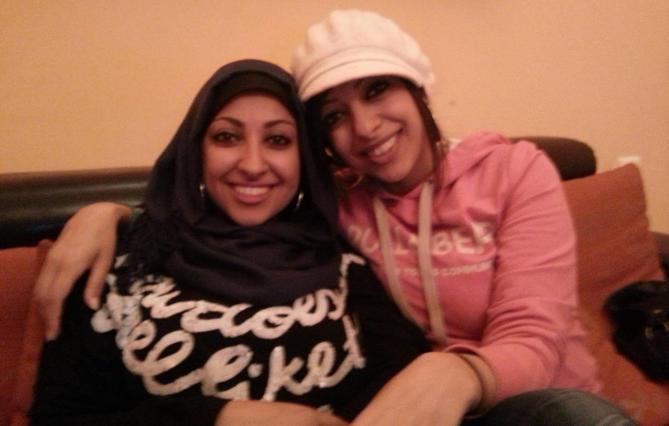 PARK CITY — To the thousands of reporters, filmmakers and star-gazing tourists walking the overcrowded strip that is Park City’s Main Street, Maryam al-Khawaja and Razan Ghalayini both seem just like any other person.

No one stops to ask if they can snap a picture with al-Khawaja. No one asks if Ghalayini is willing to sign autographs.

But al-Khawaja didn’t travel to the 2014 Sundance Film Festival to bask in her moment of stardom, and Ghalayini isn’t hoping her film, the movie she risked her life and freedom to shoot and co-produce, will be the next “Little Miss Sunshine” of the festival.

“(‘We Are the Giant’) is actually a documentary feature film about nonviolent resistance through the lens of revolutionaries in Syria, Bahrain and Libya,” said Ghalayini, referring to the protests and uprisings beginning in 2010 that came to be known as the Arab Spring.

“On Jan. 28, 2011, I was working with Greg Barker, who is the director of the film, and that’s actually the day that was the Day of Rage in Egypt, I believe, and I was sitting in my office in Santa Monica, Calif., watching the entire world flip upside down and nobody around me cared,” Ghalayini said.

“We were watching history happen before us, and Greg sat down next to me and he was like, ‘This is insane!’ And we were looking around and we were among the only two people in this massive office of like 50 who were paying attention to this. And Greg and I started talking and we said, ‘You know what? Nobody is going out there to make a film about this right now.’”

That conversation started what would become a three-year undertaking for Barker and Ghalayini that soon involved an intricate network of contacts, secret interviews and creative strategies to smuggle incriminating footage out of countries.

“We were thinking about a way to tell a story about, not just the Arab Spring, but revolution as a whole, and the engaging and beautiful experience that is people standing up for themselves,” Ghalayini said. “And so one thing led to another and within three months I had called Maryam and I was like, ‘Hey, how are you? My name is Razan, I’m working on a film, can I come visit you or something?’ And she was like, ‘Are you CIA? What is this?’”

As acting president of the Bahrain Center for Human Rights, al-Khawaja is one of the leading voices in “We Are the Giant,” along with her sister Zainab al-Khawaja. Maryam al-Khawaja has been banned from her country of Bahrain for participating in peaceful protests against the existing regime. Her sister and father, internationally acclaimed human rights activist Abdulhadi al-Khawaja, are both serving prison sentences for their non-violent acts of resistance.

“My father was sentenced to life and that sentence was upheld twice in appeal courts,” Maryam al-Khawaja said.

She still believes in non-violent demonstrations despite what’s happened to her family. But she is adamant that people not confuse peaceful behavior for complacency.

“I see how easy it is to feel so far removed from a situation, that you don’t need to necessarily care about it because it doesn’t affect your reality,” she said. “One thing that I tell students is, when you see an injustice and choose not to act, you’re not just doing something bad towards the victim, you’re actually doing an injustice for yourself. You’re stripping yourself of some of your own humanity.”

Both Maryam al-Khawaja and Ghalayini note that Bahrain is easily persuaded by American influence, and doing something as simple as including #FreeZainab through social media accounts can make a difference.