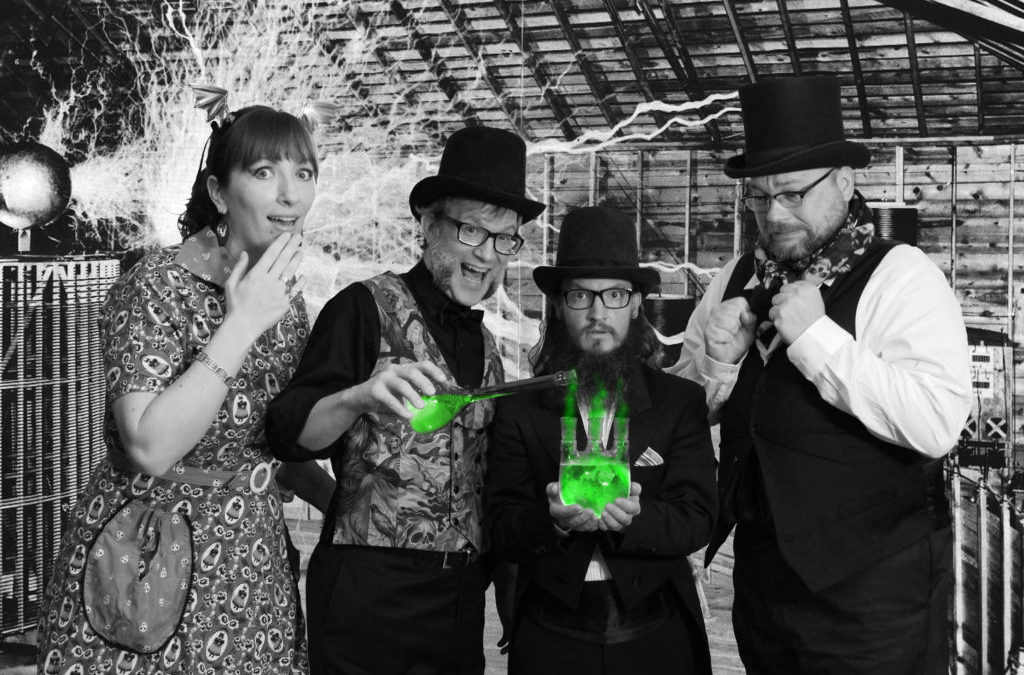 SALT LAKE CITY — If you’ve walked the streets of the 9th and 9th neighborhood in Salt Lake City, you’ve probably noticed an old movie theater that stands out in its surroundings like a T&C Surf Design shirt at a wedding ceremony.

Maybe you’ve enjoyed a classic ’80s film in the building or maybe you’ve just noticed the long lines folded outside the front door during the Sundance Film Festival.

Whatever your experience with the Salt Lake Film Society’s Tower Theatre, you know it’s a movie house that beats to its own drum, which is why it has become the perfect destination for touring artists like the Austin, Texas, rock band, The Invincible Czars.

On May 30, The Invincible Czars will be performing its composition for the 1920 silent classic film, “Dr. Jekyll and Mr. Hyde,” at the Tower Theatre for a one-night live event. Fans of either silent film or one-of-a-kind concerts should put that Tuesday evening on their radars, which is why the KSL Indie Report reached out to the Invincible Czars to find out more about what audiences can expect.

Josh Robins, band founder and lead guitarist, was happy to answer our questions:

Tell us about the Invincible Czars

Robins: “You know, the Invincible Czars is made up of late Gen-Xers mostly, maybe one millennial. I’m the only person that’s been in it the whole time. My parents moved to Fort Worth, Texas, when I was 7, from Kaysville, Utah. I moved down here to Austin in ’99, and I knew I’d be able to find people who were into weird stuff down here, and I did, but it still took a while to form the group.

“Really, the material that we played in the early days is stuff that I wrote in ’98, ’99, 2000. I’ve always liked movies scores and I’ve always listened to Bernard Herrmann and Danny Elfman. I loved Danny Elfman in the ’80s and ’90s, so I wanted to put something together that would be kind of whacky. But I also loved bands like — and I don’t know if you’ve ever heard any of these — but kind of like the underground bands from the late ’90s like Jesus Lizard and NoMeansNo.

“We did our first show back in, I think it was December 2002, and then quickly that lineup dissolved. I think we only did two or three shows. And I just kept it going with whoever is willing to do it, and it’s grown and grown.”

How did you go from a rock band to silent film accompanists? Robins: “We still play the songs. We still play rock shows in night clubs. It’s just that the silent film thing that we started doing, we were lucky that the Alamo Drafthouse was based here, and there were already groups.

“The Alamo would get rock bands or various kinds of bands to accompany silent films. But when I’d go see them, only a few of them really played with the movie. You know what I mean? A lot of them just kind of — it’s like they were playing a rock show with the movie as a backdrop. Does that make sense? If you didn’t like the band, you weren’t going to enjoy the shows, you know?

“And I thought, ‘Man, I could do a way better job than this.’

“The trend of silent film accompaniment here in Austin had kind of waned already by the time I decided to do that. That was 2006. I was bugging the Alamo Drafthouse, which back then was just a single theater here in Austin. I was bugging them every couple of months, ‘Hey, will you let us do one?’ But I didn’t know that much about silent film. I only knew the ones I had already seen the other bands in town do. So I needed them to kind of guide me as to what movie to do.

“They assigned us one, and we did ‘Aelita, Queen of Mars’, which is a Russian sci-fi movie. So that was the first time we did this sort of thing, and we just kept doing it. It was a long road from there to where we are now.”

We saw the Invincible Czars do “Nosferatu” at the tower last year and your timing and syncing were incredible. What is the process of putting music to classic films?

“We have to consider the synchronization as we are creating the music. Timing, in my opinion, is the most important thing that a silent film accompaniment group can pay attention to. We can play wrong notes. We can even maybe play the wrong music, but if you don’t change when what’s happening on screen changes, that’s the difference between, I think, a pretty good and a great silent film accompaniment performance.

“So, when we’re creating the music, we first watch it. We watch the movie with no sound, and somebody always falls asleep. Sometimes it’s me. Because a movie without sound is kind of — it’s dull, you know — but we’re taking notes. A lot of that stuff gets figured out as we go, but that first session, we make a spreadsheet and we ask, ‘What time point does this change? What the heck is going on in the scene? What’s the emotion?’

“Then we’ll pick the music that we think really works, some classical music as a springboard, and then we just start coming up with themes. We then break up the movie and use a software called Sibelius to create actual notation that will sync with the movie. That software is showing us the movie and playing our MIDI or synthesizer sounds of what our score sounds like. ‘Is this working? Do we think this will sound good on real instruments?’ Because sometimes, it doesn’t.

“Sometimes we get in and start playing it on the real instruments, and it’s like, ‘This isn’t working,’ or ‘This is lame,’ or ‘This sounds too much like a rock band.’ So we’ll make changes from there. And then it just gets refined by performing it over and over. And there’s those little things like, ‘OK, he raises his eyebrow and then it cuts. Let’s stop. Let’s all stop right there.’

“That’s kind of how the process goes, as far as creating the music. But then the syncing of it, we’re all looking at metronomes the whole time. We know if this piece is at 132 beats per minute, and we just play it just as it is on the chart, and we stay with the metronome, we’re gonna come out OK. But even that’s hard to do. There’s still the human element.” “The interesting thing with these, we get to go around and play in all of the old theaters. It’s been really cool. We played at The Kimo in Albuquerque and the New Mission in San Francisco, and lots of cool theaters around the country. It’s interesting to see how each of them operate, what they look like. Some of them have been renovated multiple times. The Tower is interesting because it’s kind of just a black box, you know? There’s not really super-fancy carpet or lighting. When we got in there to load in, there was a mop bucket right next to the screen that just kind of stayed there for the show. It reminds me a lot of the way the Drafthouse was when it began.

“We’ve gotten to see a lot of America on our tours, especially when we toured east last fall. We were out in the New York area and kind of the Eastern Seaboard and we came across through the Midwest.

“One thing I’ve noticed, though, is Americans seem to have become so impatient with each other, and I think that this kind of a show gives the audience an opportunity to slow that down. These movies are almost a hundred years old. You’ll see turns of phrase or expressions that we still say today, that these people are using in the phrases in these silent movies. The stories are basically the same stories.”