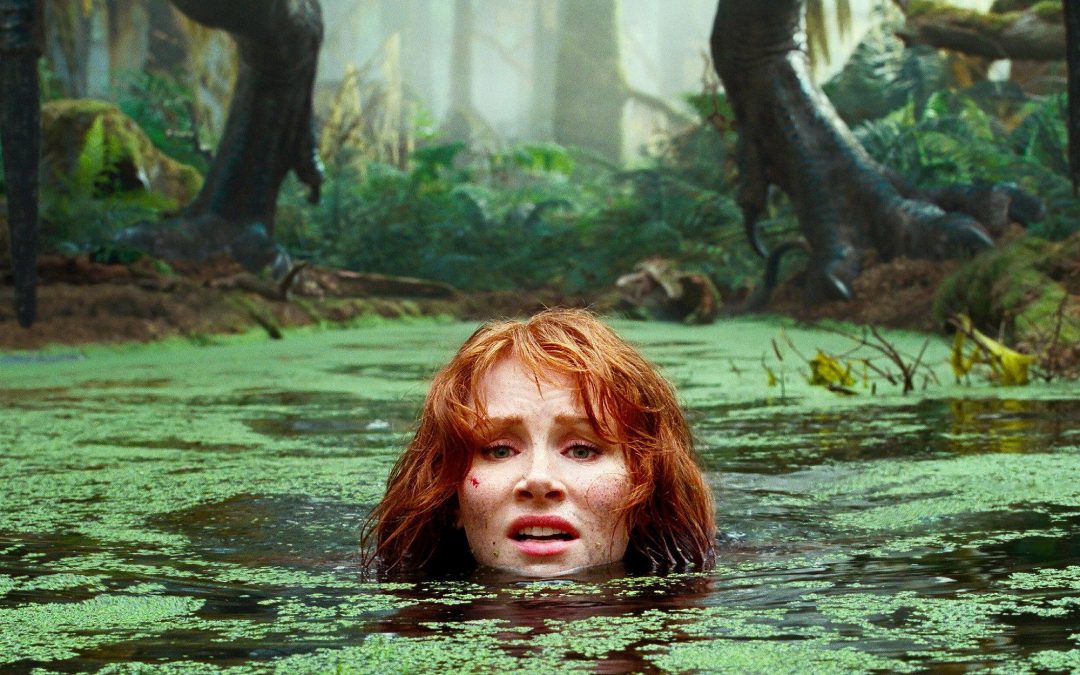 Jurassic World: Dominion – 2 stars out of 4

There are a lot of scenes in “Jurassic World: Dominion” where characters have threatening encounters with a dinosaur, enough that they start to feel redundant. But one stands out in particular. As with most of these scenes, the characters freeze in terror when they detect the presence of the threat, and start whispering in the hopes that certain death will pass by without incident.

There’s only one problem: they are flying a World War II era cargo plane with massive propellers that would drown out the sound of your average garage band. Now, this might make sense if the dinosaur in question had wandered out of the cargo hold, but no…it’s a massive Pterodactyl* flying outside the plane.

Odd moments like this take “Dominion” from the level of “perfectly watchable escapist adventure” down to something more like “disappointing unholy mess.” The original 1993 “Jurassic Park” has always been the runaway best of these movies, and every subsequent sequel seems to underscore that point even more.

To its credit, “Dominion” starts off in an interesting place. In the last film, the captive dinosaurs were taken from their island home and released onto the North American continent. So we begin the story with the United States functioning as a kind of odd exaggerated version of Yellowstone National Park, where day-to-day human life is occasionally interrupted by a random Stegosaurus meandering across the highway instead of a disinterested bison. Is this a world you would like to explore from the safe distance of a leather recliner seat? Yeah, me too.

The heroes of the “Jurassic World” trilogy, Owen (Chris Pratt) and Claire (Bryce Dallas Howard), have holed up in a remote cabin in the Sierra Nevada Mountains, where they are hiding Maisie (Isabella Sermon), the cloned and increasingly angsty teenager who is topping the wish list of various nefarious scientists around the world. (To be fair, I supposed I would be pretty angsty too, if I thought I was a clone. And if I was wrestling with the guilt from having unleashed a bunch of dinosaurs on an unsuspecting civilization.) Anyway, when Maisie is kidnapped and taken to the Italian headquarters of an obligatory evil science corporation named Biosyn (Bio-Sin? Really?), Owen and Claire set out to rescue her.

In the meantime, an outbreak of disturbingly oversized locusts throughout the American Midwest brings original trilogy heroes Ellie (Laura Dern) and Alan (Sam Neill) out of hiding, and with the help of their old friend Malcolm (Jeff Goldblum, thank goodness), they also connect the dots to Biosyn. All roads eventually lead to the scenic Italian Alps, where Biosyn and its evil Steve Jobs knock-off CEO also happen to host a massive dinosaur sanctuary, and you don’t have to be a geneticist to guess what happens next.

After the promise of the first “Jurassic World,” which was admittedly a soft remake of the original film, director Colin Trevorrow’s trilogy has become lost in an overcooked mess of chaotic action, excess characters, and poor story choices. On the surface, there’s enough happening that some audiences will just be able to turn off their brains and convince themselves that what they are watching is worth their time. But just give it a few years…your brain will be there to remind you that this is just a forgettable slog of a would-be blockbuster.

Normally there would be no reason in the world to compare “Dominion” to something like “Top Gun: Maverick,” but once you set aside the vastly different subject matter, one glaring similarity highlights everything you need to understand about these two contemporaries. Both movies are summer blockbusters trying to take advantage of audience nostalgia in order to beef up a present story tied to a cherished past. In “Maverick,” the nostalgia complements a well-executed and streamlined production with strong narrative qualities. In “Dominion,” the nostalgia feels clunky and tacked onto a production that packs too many characters into a too-confusing story.

Worst of all, as my Utah.film colleague Dani has also pointed out, “Dominion” is not scary. Not in the least. In the world of “Jurassic Park,” that is an unforgivable sin. Almost as unforgivable as the nonsense bumper sticker preaching we get over the final fade-out.

A few years back, I covered the 3-D re-release of the original “Jurassic Park,” in all of its IMAX glory. The 3-D was pretty forgettable. What I remember was the powerful reminder of how incredible that first movie was. “Dominion,” like most of the “Jurassic” follow-ups, won’t inspire that same wonder, and it’s really too bad. At least in this case, they just don’t make ‘em like they used to.