‘Jurassic World: Dominion’ might have had good intentions…. and that’s about it. *A RANT* 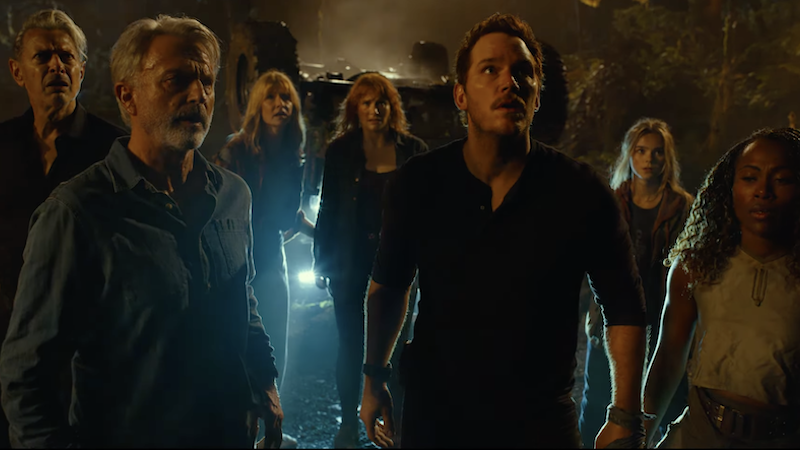 Following the world-altering events of “Fallen Kingdom,” dinosaurs are now living in the outside world. Owen (Chris Pratt), Claire (Bryce Dallas Howard), and Maisie (Isabella Sermon) have become a pseudo-family hiding out in the woods. Although sympathetic to the dinosaur survival cause, their hands are tied from venturing out too far due to a high demand to study the human clone. Meanwhile, Ellie Sattler (Laura Dern) is brought in to investigate a mysterious horde of large locusts that point to the new genetics company on the block, BioSyn. She recruits Alan Grant (Sam Neill) to join her to meet with Ian Malcolm (Jeff Goldblum) to get to the bottom of this.

As you may have noticed by now, the trailer far exceeds what the movie provided. In fact, there’s a lot of differences between the trailers and the film in having whole scenes that don’t exist and different takes used of moments with the main cast. My expectations were very low, but I’m still surprised by how much this movie unintentionally made me laugh. It is absolutely ridiculous, which may make this a fun movie to watch once and never think of again, but I have some specific issues that I must get off my chest.

I was very excited to see humans and dinosaurs coexisting. I was morbidly curious after the events of “Fallen Kingdom” about how they could possibly dig themselves out of the narrative hole of releasing dinosaurs into the world. Well, the answer is apparently to just ignore it for most of the film. Besides some news montages at the beginning and the National Geographic-esque montage at the end, we really only spend time with dinosaurs that are owned. It was so boring and lazy.

On that note, the lazy writing was atrocious. I’m convinced from the nostalgia bait but massive let-downs that the writers never saw the original films, only the memes. It’s no wonder that besides the Jurassic World movies, the only other story of note that Colin Trevorrow worked on was “Rise of Skywalker.” There were plot points concerning the science and living situations that were set up in the previous films and carried out fairly well until it all fell flat on its face after the expositional scenes. The lines were uninspired and made the story drag. Remember how quick and witty the other films were? Ah, those were the good ol’ days. Instead, we now have characters stopping to explain every little obvious action to each other in real time. This is the kind of rough draft dialogue and story I would turn in for an inconsequential school assignment after a long week of procrastination.

And because of slow dialogue-heavy scenes, we had to speed up the action. This is the perfect example to contrast with “Maverick” since the confusing action disorients us and pulls us out of scenes. There is never any tension or build up that will make us look back and say, “hey, remember the ___ scene from ‘Dominion?’ Classic!” These sequences look like the garbage CG featured in the Fast and Furious Universal Studios ride. In a series that became so famous for ground-breaking spectacle that inspired generations of cinephiles, this is heart-breaking.

The main antagonist is basically the Steve Jobs/Bill Gates/old-weird-tech-guy, previously seen on “Don’t Look Up.” He is unremarkable besides the uncomfortable cringe his ‘quirkiness’ brings. *Sort of spoiler* He was so bad, and the other new cast members were so poorly acted that I thought there was going to be a plot twist where the new characters were the real evil masterminds all along. They weren’t, but now I’m just confused on why any of these characters were directed to act this way. Furthermore, I won’t go into too much detail, but I’m very curious as to why this story fuels a lot of current conspiracy theories floating around about our current food supply situation. Take the antagonist and this plot line as you will, but it was a surprising choice for Hollywood.

As a personal note, Ellie Sattler is one of my all-time favorite film feminists because she was so cool and could hold her own against anyone—even a dinosaur—, but there was also this very tender motherly side of her. That’s what made her relationship with Alan Grant so interesting because she challenged him intellectually AND personally, while it was still clear he was a genius (albeit flawed) in his own right. Fast forward to fourth-wave feminism Ellie where her children are out of her life and she can finally be free to push the bumbling idiot men around. It was discouraging to see how modern ideologies can be so damaging to past triumphs. At least Jeff Goldblum is still just as entertaining to watch, but the awkward dialogue even tripped him up a time or two.

As I said previously, I laughed and was decently entertained but I would certainly not pay full price to see it, nor will I watch this movie again. I don’t think anyone will. That being said, I would recommend seeing this movie just to witness the disaster in person, preferably on a discount night in theaters so at least you can enjoy the lighting and the sound design in its full glory.

It’s definitely a PG-13, but not a hard one. The violence was primarily off-camera and the language wasn’t stronger than a Marvel movie. Also, since tension is never built-up, it is the least frightening out of all the Jurassic films. It might be a good, safe one to introduce to kids, but frankly, they deserve better.