“Marry Me” is What You Expect 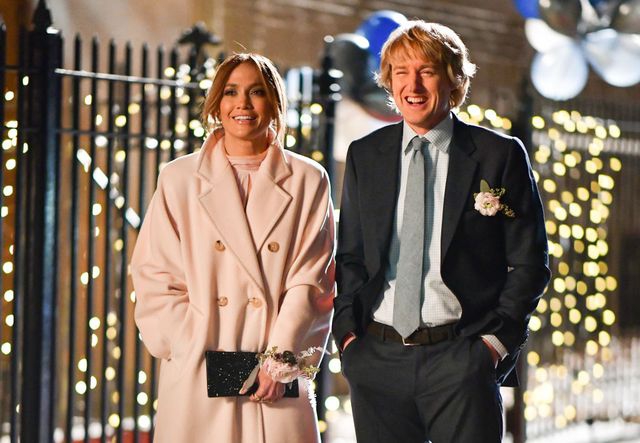 Right as she is going on stage to say “I do” to her superstar fiancé (Maluma) during a massive concert, Kat (Jennifer Lopez) spontaneously decides to try something new by marrying a random man in the crowd. Charlie (Owen Wilson) goes along for the ride to win points with his angsty pre-teen daughter (Chloe Coleman). Although they are living in completely different worlds, Kat and Charlie develop a deep connection as they rely on each other during a time they are both needing support.

Not Much to Report

Chances are, you have seen trailers for this movie all over social media. It is our first big budget romance movie in a while and it sticks close to the tropes to satisfy what we’d want from a big cheesy romance. The movie is very sweet with all the glitz and glamor needed for some good ol’ escapism.

The leads are the highlight of this film. Lopez and Wilson have so much charisma and charm in their line delivery and interactions. I found myself laughing a lot as Wilson sells his loser single dad character. The movie also did a great job digging into the perspectives of these characters and how their lifestyle differences would create conflict in a way that makes you cheer for them when they overcome those obstacles. It is still cliche and expected, but their acting makes it enjoyable to watch.

The soundtrack is filled with generic pop songs, though they were written for the film. They aren’t bad but there is nothing special that makes them unique. Maluma and Lopez are amazing artists and performers, so the segments where they are performing is enjoyable; I’m just saying that I wouldn’t listen to these songs outside of the film.

The strangest aspect to this movie was all the preaching and diversity highlighted. In some ways, they did a good job showing diversity in a natural way, but it also felt like nearly every scene covered thesis statement after thesis statement about gender roles and standing up for yourself. There are a lot of artificial girl power moments that pulled me out of the experience because these characters were suddenly speaking so unnaturally.

The premise provides some interesting commentary on marriage that wasn’t as explored as I hoped it would be. In the scene where Lopez and Wilson get married, it felt like the climax of a typical RomCom which I thought was clever and could flip the genre on its head. We could see what life is like after the “happily ever after.” We see that a little bit as they are trying to coordinate and figure out what their marriage entails, but the first couple of scenes is all we get on that topic.

Ignoring those faults, I had fun kicking back and watching this movie on Peacock knowing I probably won’t watch it again. It isn’t bad, but not remarkable.

It’s hard to nail down who this movie is for. Wilson’s daughter has a pretty significant arc and they spend a lot of time giving kids pep talks, but there are also quite a few raunchy jokes all throughout. Sarah Silverman’s character is pretty vulgar in some moments. There isn’t sex or nudity in it but there is a lot of immodesty. Perhaps this is a movie for adults with kids as long as those kids aren’t around while its playing.