Mild Cheers for this Cheeky Meta-Murder-Mystery 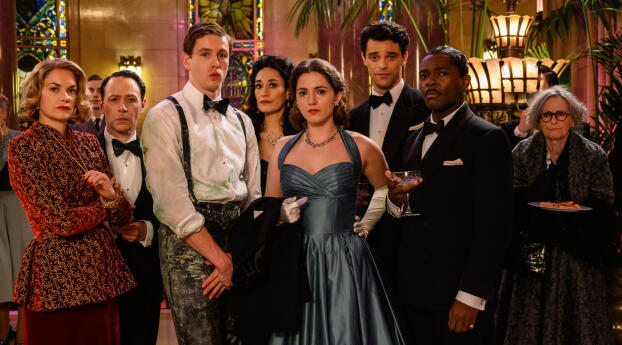 In the version of Agatha Christie’s “The Mousetrap” that my wife and I saw at Hale Centre Theatre in
Sandy, Utah last year, an inspector arrives at a country manor in a snowstorm, someone is offed, and
oddball houseguests are interrogated. Nearly every character is given believable motives for killing the
victim, and the audience all become surrogate inspectors, champing at the bit to figure out “whodunit.”
The final reveal is so shocking that the epilogue breaks the fourth wall, with actors swearing the
audience to secrecy. Don’t spoil the ending!

Christie’s famous play has never been adapted for the big screen—more on that later—but director Tom
George is trying to sneak it past the ushers and the ticket takers. In theaters now, George’s British-
American comic mystery “See How They Run” swoops in on London’s West End circa 1953, where “The
Mousetrap” is being celebrated by its cast and crew for staging its 100 th consecutive performance, the
play having opened the prior year.

Saoirse Ronan and Sam Rockwell play a pair of detectives on the hunt for a murderer who is terrorizing
cast members of “The Mousetrap.” The story follows the plucky duo as they find clues, pursue leads,
and interview suspects in the theater world. Meanwhile, a “Mousetrap” film adaption is being
considered by real-life movie producer John Woolf (of “The African Queen” fame), but would-be
Hollywood director Leo Kopernick (Adrien Brody) wants to jazz up the movie version with a fiery, bloody
ending that will be sure to put American butts in the seats. The brash, arrogant director drunkenly flirts
with the play’s female lead, Sheila Sim, whose husband Dickie Attenborough defends her honor in the
traditional way (fisticuffs).

Brody’s exaggerated features make him look like a caricature of a real person. In fact, as we learn (or are
reminded of by Brody), the first victim of a murder-mystery is usually a sleazy scoundrel. There will be
no shortage of suspects with reasons to kill Brody, who narrates the story even after his own death at
the beginning of the movie. I’ve heard of unreliable narrators, like Rachel Watson from “The Girl on the
Train,” but dead narrators? Yes, they exist, because movies make their own rules. It worked for sardonic
Lester Burnham in “American Beauty,” and for “Sunset Boulevard’s” Joe Gillis. That blew me away. Even
the exploits of the Desperate Housewives are made known to us by a deceased housewife.

Compositionally, this movie smacks of a Wes Anderson picture, with snap-zooms, hyper-frequent use of
symmetry, split screens which are often used during flashbacks, a few title cards (one of which is directly
referenced on-screen by foppish playwright Mervyn Cocker-Norris, played by David Oyelowo), and a
jaunty score consistent with the times.

If I was forced to write a one-word review, it would be: Cheeky. This meta-murder mystery might make
for a smashing good time, if you are in the mood and in the know. This movie is overstuffed with so
many winks and nods it will make your head spin trying to keep up.

Ronan plays the eager, young trainee Constable Stalker, doe-eyed and bursting with enthusiasm as she
is assigned to work with a world-weary lush, Inspector Stoppard (Rockwell). The two are assigned to
investigate Kopernick’s death, whose desired film version of the play would bear little resemblance to
the play, but is that a sufficient motive for murder? Much of the comedy is mined from Ronan, whose
love of cinema and the arts cannot be contained, and she helpfully explains to her partner (and by
extension, us) who the main players are and what other plays they were in and why they are important.
She also has the quirky but critical habit of writing everything down.

Although fictional, much of the story within the story is true. Agatha Christie notoriously disliked film
adaptations of her work, and decreed that “The Mousetrap” could not be made into a movie until six
months after the end of its theatrical run. Fast-forward 70 years, and “The Mousetrap” (except for a
brief respite during the Covid-19 Pandemic), is the world’s longest running play. The production’s
apparent endlessness has left more than a few hopeful moviemakers in its wake. Will it ever be allowed
a proper film treatment? This is where the “meta” comes in. “See How They Run” is the closest possible
thing (for now) to a film adaptation of “The Mousetrap,” as all the characters in this movie know about
“The Mousetrap,” are starring in, writing, or producing it, trying to twist it into a Hollywood production
or are anxiously watching performances of it. The meta-nature is many-layered, as “The Mousetrap”
itself is allegedly based on a real murder, and this movie knows that, and then another real murder
occurs among the cast. As to whether Dame Agatha herself makes an appearance, it shan’t be spoilt by
me.

Now, for my opinion.

But be warned: What may be to some people a fun, fast-paced, clever whodunit full of witty one-liners
may for others be an exhausting exercise in indulgence, perhaps too clever by half. I suppose that if you
are a fan of murder mysteries, especially British ones, and most especially those of Christie, you will
understand the references, asides, throwaway lines, and even the significance of the names of the
players. Consider the following: In one scene, Inspector Stoppard is called a real hound. Now, how many
people know that famous playwright Tom Stoppard wrote a one-act play called “The Real Inspector
Hound”? Not me, at least not until I read it online after seeing the movie. This is the type of movie that
likely has the 2019 smash hit “Knives Out” to thank for its greenlighting. But “Knives Out’s” popularity
was due primarily to its populism: It’s a charming, thrilling, funny well-written crowd-pleaser that
required almost no a priori knowledge to enjoy it wholeheartedly.

This is not to say that “See How They Run” cries out for a scholarly mastery of the genre, nor that one
must be well-versed in the works of Christie. But, I could definitely see how it would help. The movie is
forgettable but pleasing escapist fare for its 98 minutes on one level, but I suppose a deeper
appreciation requires the aforementioned depth of knowledge. I’m guessing the deep cuts will be a
bridge too far for most.

I likely fall into the former category. I’m not an especially astute student of the genre it both spoofs and
adores, and I haven’t read more than one Christie book. Having said that, it mostly worked okay for me.
I’m certain that some of what I suspect was supposed to be uproariously funny elicited a chuckle. The
biggest laughs came from the detective duo’s banter, with Rockwell’s pauses, sideways glances, and
other reactions to Ronan’s earnest over-explanations of nearly everything.

If you fancy classic whodunits, you will be happy to hear that, yes, there is a murder (or two?), an
investigation of various suspects, a surprise reveal and a delicious twist. Maybe you will be smart
enough to not only get the references but to discover the culprit before it is revealed on-screen. Or
maybe you will be like me, having a laugh without being fully immersed, always being reminded that
you’re watching a movie that not only knows it’s a movie, but knows it’s a murder mystery while it is also spoofing murder-mysteries, and, even knows that it would like to be faithful retelling of “The
Mousetrap,” but blimey, Dame Agatha has spoken, and it simply cannot be. But, this is the next best
thing.

Although if you have a chance to see “The Mousetrap” live, do take it. I promise I won’t spoil the ending.