The Boss Baby is Back! 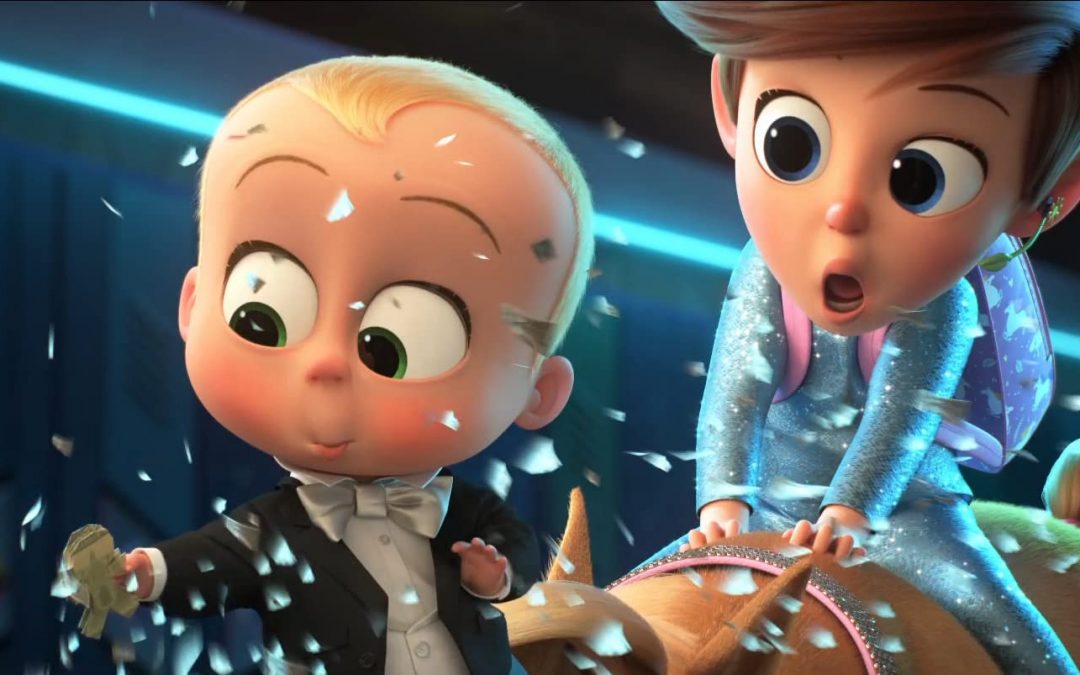 Now grown up, Tim (James Marsden) and Ted (Alec Baldwin) have grown apart, but they come back together for a new mission from Baby Corp: to stop an elementary school that is conspiring against the parents. Using special baby-inspired technology, the brothers become young again to infiltrate this highly rated school that Tim’s daughter, Tabitha (Ariana Greenblatt), currently attends. Tim’s bond with Ted isn’t the only relationship that needs to be mended as being in his daughter’s class allows Tim to support Tabitha in new ways through her growing pains.

My Thoughts on the Series

I was pleasantly surprised by the first film. It was genuinely funny with a great lesson about accepting a new little one into a family. I especially loved the many different animation styles that showed the complex imagination of Tim. If you can get past the butt jokes, there is a lot of fantastic humor and fun to be found. One particular scene that gets me laughing hard is when baby Ted is giving Tim a motivational speech through the kind of posters you’d find hanging in a CEO’s office. They take their ridiculous premise of a boss baby and they run with it.

Coming into this movie, I was nervous that it would be a dumb cash grab (just like how I felt about the first one), but again, I was blown away. It somewhat resets the arcs from the last film, but the story is truly unique with a logical continuation of the Templeton family’s adventures. The jokes were even funnier this time, and the story shifted from telling a story about a kid, to a story more centered on parenting, which may make this one more appealing to older audiences.

Something I enjoyed about the first one was how the story was left ambiguous about whether the events were real or just something made up by Tim to reassure his daughter about the change she was currently experiencing (the more likely option). By creating this sequel, they dive right into how Tim’s story was actually real all along which I didn’t think I would like, but they handled it well by focusing more on the relationships than the lore of Baby Corp. In fact the new “boss baby” (Tim’s baby voiced by Amy Sedaris) was the least interesting part of the movie, but it didn’t distract from the rest of the plot.

One way you can tell that this film was well thought out is, once again, through the animation. This time, there’s only one style that shows Tabitha’s imagination. She isn’t as creative as her dad, but she thinks in terms of numbers, lines, experiments, etc. which is what is shown when she is using her imagination. I think it is really neat how one of the main messages is that Tabitha is her own kind of kid and is celebrated for that.

There’s also a lot this movie adds to the conversation about how kids today are pressured to be the best and the brightest, constantly in competition with other kids. This made the antagonist side of the film very intriguing to me, and Jeff Goldblum was the perfect actor to cast as a highly advanced educator who has a soothing but quirky voice.

If you feel turned off by the premise, trust that there are talented artists and writers behind this movie that have created a surprisingly hilarious, heartfelt family-centered series the whole family can enjoy.

There’s plenty of childish humor, and some cartoony action, but it is definitely safe for young viewers. Most of the jokes that are meant for the parents aren’t “dirty” but depend more on references and real world things that a kid wouldn’t pick up on.