What Stood Out To Me “In The Heights” 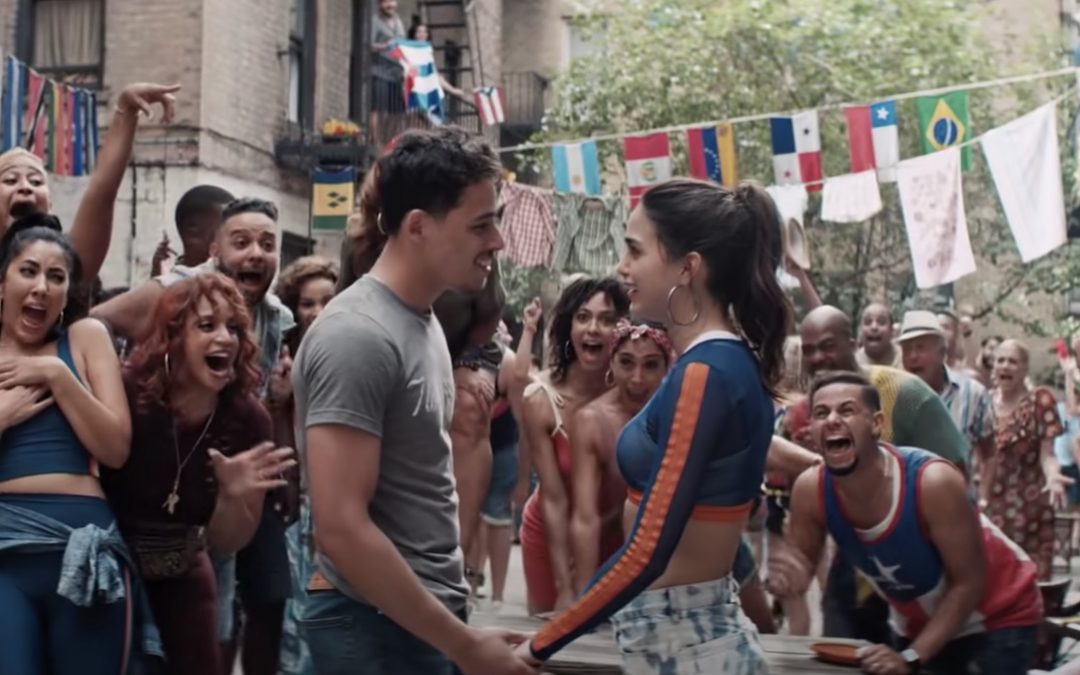 “In the Heights” is a musical created by Lin-Manuel Miranda that ran on Broadway in 2008, winning a Tony for Best Musical. Miranda came back to produce and act (in a minor role) in this film adaptation. For those who are familiar with the original production, Olga Merediz reprised her role as Abuela Claudia–and kills it being the most loveable grandma in the world! Christopher Jackson (“Hamilton”) who was also in the original cast has a fun cameo. The rest of the cast features many talented Brooklyn and Hispanic actors, and Jon Chu (“Crazy Rich Asians”) brings flair in his directing. The cast and crew were expertly selected.

The movie begins with an incredible opening number that pulls you in immediately to a bustling neighborhood with a cast that introduce themselves as they get their morning coffee with lines from their main songs that will be featured later. There’s this interesting blend of individuality and unity as they each have their own struggles and arcs, but they are all one as a loving community of immigrants.

There’s the expected Miranda rhythm in the story of Usnavi (Anthony Ramos), a Dominican who dreams of going back to the island to restore his father’s old beachfront business, el Sueñito (the little dream). We then move around to the “little dreams” of Nina (Leslie Grace), who returns from Stanford after being overwhelmed by her first year; Kevin (Jimmy Smits), Nina’s father who has sacrificed so much to give her the education he never had; Vanessa (Melissa Barrera), who wants to move out into another part of New York and pursue a career in fashion; Daniela (Daphne Rubin-Vega), who yearns to keep her salon in the neighborhood; and many others ALL with their own motivations and arcs. The variety is the best thing about it, featuring people from many different countries of all ages. Though the cast is large, their stories are easy to follow and they are all connected to one another.

This is a small spoiler, but if you want to go into this blind, skip this paragraph. The idea that impressed me the most with this story is how those who wanted to stay in Washington Heights left and those who wanted to leave, stayed. This shows that both options of staying in your community and branching out are valid choices. Their growth is in how they reflect on why they wanted to leave or stay so badly, and realizing there’s a better choice as they grow.

My only criticism would be of a brief politically charged scene with a protesting group listening to a speaker. While I understand that it seemed like a needed addition to inspire the audience to take action, I think it was a divisive move that clearly shows an inclination to a certain party and political leaders. This movie doesn’t always align with my beliefs and perhaps the views of others; however, there are still many themes and messages that are positive for people of all political stances.

More broadly speaking, this movie had a lot of heart, humor, and respect. Sure, it’s a fun time with all the imagery and dancing, but this movie comes down to the story of people. These characters seem real and relatable through their general human struggles, but it is also respectful to the unique challenges these ethnic groups face.

My Thoughts on Modern Movie Musicals

I’m a big fan of musicals, but I was honestly very hesitant about seeing this movie. I have been very disappointed by the wave of movie musicals that have been released in the last couple of years. We had a bunch of movies with fantastic stories but lacked catchiness in their songs (La La Land, for example). Then, we got an incredible soundtrack with The Greatest Showman, but there was no story or characterization and all of the elements were unrelated to one another. There is so much technology, money, and editing potential with film that is impossible to attain with a live performance. That has been my greatest disappointment with this genre.

I still hope to see some special effects and voice editing evolve their additions in the future, but I love how this musical isn’t the same without all the intricate set details, transitions, and beautiful New York scenery. No offense to the original show, but I want to applaud the movie for utilizing the unique tools filmmaking has to offer. The words matched the acting which fell perfectly in line with the choreography. Oh, the choreography! Everything is an interwoven harmony of one complete story.

While I said that there is a wisely assembled large cast, Washington Heights itself is the main character. It is the home and source of power and community for these characters. It would be a disgrace to give this show anything less than the busy streets and the New York city skyline in the background.

Why This Was a Meaningful Viewing Experience For Me

Over three years ago, I spent five months in Nicaragua. It’s the country in between Honduras and Costa Rica. If you hadn’t heard of it before, neither did I until a short time before I left. I spent every day walking down dirt streets, passing by thin, tin walled homes and barbed wire fences. Being there was this wild, fun adventure for me, but it was the reality of those who lived there.

Using the Spanish (…well, slang) I learned there, I continued interacting with Latinos living in the Provo, UT area. Now, I grew up in that area, but I had no idea how many Hispanics from all over lived in Utah within highly populated neighborhoods kind of like the Heights.

I don’t want to say that I know everything about their lives and cultures, nor that Washington Heights is exactly like Mexico Chiquito in Heber City, but I felt a strong connection to the display of culture in this film. From the stores to the phrases to the idea that everything closes down if it’s too hot, this movie pulled me back to a time and a people that I loved.

A passion project I have in the works is a documentary about the Latino community in Utah because it is vast and in need of recognition. These are real people who have made huge sacrifices to be here and are still sacrificing every day to get by. Honestly, our country often treats them like dirt even though most of the time, these immigrants are the ones who were lucky enough to have the education, connections, money, and/or grit to escape harsh circumstances. They are inspiring, not dangerous.

This movie hit me so hard because of how they did what I’ve been wanting to do: show the beauty and humanity in Latin American cultures so we don’t treat them like they are simply heavy labor workers in the background who maybe shouldn’t even be here. Like at the last turn of the century, Hispanics are our new wave of Irish, Jewish, and Chinese settlers who will soon become the ancestors of many American citizens. They have a lot to offer, a lot of unique gifts (which we can see in how festive, resilient, and loving they are in this movie), and most importantly, they are humans.

Parent’s Guide: While I love the culture, this movie does have a lot of suggestive lyrics, dancing and outfits that are true to the culture. There’s a song all about the neighborhood’s juicy gossip, and the characters involved in that number are the ones who are most tied to recurring sexual themes. Nothing overtly sexual happens, and this movie does embrace family, but for some families and mixed company, this may be a little on the uncomfortable side.