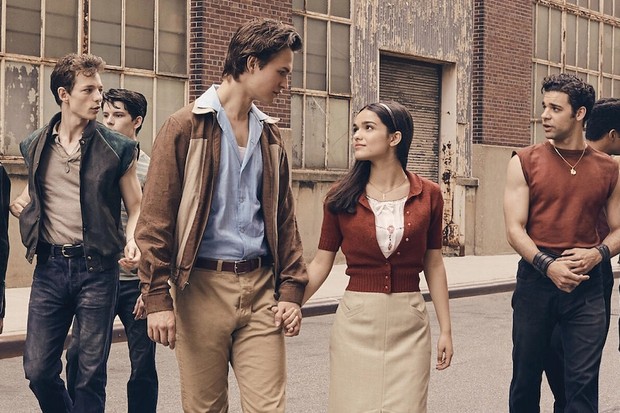 A new adaptation of the hit musical about star-crossed lovers trying to find their way in the 50’s New York slums as they are in the middle of a massive gang war between the Jets and the Sharks. Tension escalates between the gangs, threatening the relationship.

Spielberg has done it again, but are any of us really surprised? Granted, this project was unexpectedly ambitious, even for him. This was his first musical, tackling one of the most beloved, untouchable movie classics, and yet it was a perfect film all across the board. Furthermore, it provides a needed update in content that I think even fans of the original will appreciate. I broke down what I look for most in a musical that will hopefully illustrate the incredible work that was accomplished in this masterpiece.

I have to feel the motion in a movie musical, and by that I mean the movement of characters and camera. The difference between a regular movie and a musical is heightened energy, which is conveyed best through extra motion. There are so many complex shots in this movie that require precise coordination between the choreography and camera movement, which creates an experience that is exhilarating.

This one is probably very obvious, but what is a musical worth if the music isn’t great. This is definitely a movie I would buy the soundtrack for. It has all the classic songs you love that are recorded beautifully. The individual voices blend so well together, especially Tony (Ansel Elgort) and Maria’s (Rachel Zegler) which is crucial during the romantic songs. Something that I think helped in this area is that they recorded first in the studio so there was the assurance of a good sound, but they also recorded on set to capture the authentic emotions that were going into the scenes. The combination of the two methods made the sound very real and gorgeous.

This goes in line with the sound and movement, but I like to see BIG in movie musicals. Big sets, big cast, big effects, big budget. The musicals I love have this crazy big scale to create this world you can immerse yourself in. This movie doesn’t fail in that regard, and it is only enhanced when seen in a theater.

Probably as one of the most important elements, a musical has to have style. The cinematography here is insane. The opening scene is probably the best opening scene I’ve ever witnessed because that look instantly made me so excited. It seriously looks like this film transports us back to the past; not just because it was shot on film, but the swagger of the whole cast truly sells it. I will be extremely shocked if this movie doesn’t win Best Supporting Actor and Actress at the Oscars. Anita (Ariana DeBose) and Riff (Mike Faist) stole the show and were instrumental in the best numbers and scenes. Every one of these actors killed it with their charm, physicality, grit, and emotion.

Although the original isn’t a musical I cared for, I can appreciate how well done this was and how it is a total upgrade. All in all, this movie was fantastically crafted and is going to age very well. I would recommend it to anyone looking for a great movie and/or a great musical.

This is a strong PG-13 movie despite a musical from Spielberg seeming on paper like fun for the whole family. This version strays from the fantasy to provide a more fair depiction of these characters. There is gang violence and blood right off the bat and you feel that there are real stakes all throughout. It is also very vulgar (mostly in Spanish, but that might not be a concern since it isn’t subtitled). The main thing that makes this a poor option for younger viewers is that it deals with themes like racism, rough upbringings, sexuality, sensuality, rape, and grief. While this is good and dealt with appropriately, it may be disarming for those who expect the original’s lighter tone. Be very acquainted with the story and its elements before bringing your children.