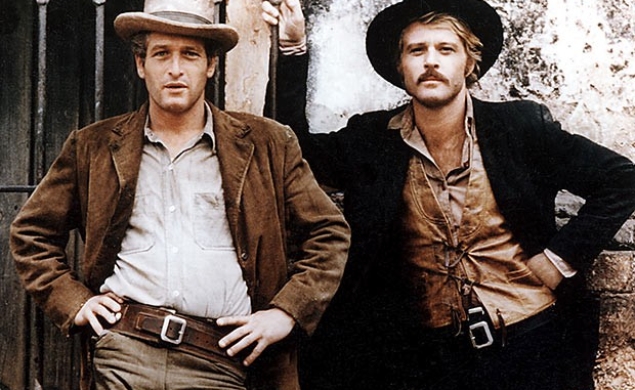 OLD TIMEY UTAH – Last month, we kicked off our monthly KSL classic movie feature with the ever-controversial “The Birth of a Nation.”

It was, admittedly, a heavy intro to this series, but we knew we had to get it out of the way. There’s no version of film history that doesn’t include addressing D.W. Griffith’s racist elephant in the room, so we decided to deal with the topic out the gate in order to quickly turn our focus toward the best parts of classic Hollywood — like “Butch Cassidy and the Sundance Kid.”

This year, we’re celebrating the 50th anniversary of a film that has made the world a better place — not just for fans of the now-beloved classic, or the Sundance Mountain Resort or independent film festival, but especially for the 20,000 kids who visit The Hole in the Wall Gang Camp annually.

“Butch Cassidy and the Sundance Kid” is a movie that was met with mediocre reviews and reasonable commercial success, but later went on to find a loyal audience and substantial profit in the home video market. It’s also a film that affected its lead actors so much that they would go on to name some of their greatest personal accomplishments after their respective characters.

Here’s a look at how the movie is still relevant half a century later:

While Paul Newman and Robert Redford are really the champions of “Butch Cassidy and the Sundance Kid’s” lasting cultural staying power, credit for the good-natured buddy film rests in the pen of writer William Goldman.

Goldman spent years casually researching the historic outlaws, all the while knowing there would be problems committing their story to celluloid. As Turner Classic Movies points out, Goldman was aware his story wouldn’t contain the standard level of action enjoyed by traditional westerns, and there was also “the fact that Butch and Sundance ran away which was not a typical trait for Western heroes and legends.”

Goldman was also interested in walking a fine line between humor and drama at a time when films like the originally X-rated “Midnight Cowboy” — a movie that would eventually beat “Butch Cassidy and the Sundance Kid” for best picture — was more in line with what Hollywood considered a respectable buddy movie.

As a result, though the stories vary from source to source, Goldman’s script was not an especially easy sell to studios in the late 1960s. There are reports of one executive who found the idea of protagonists fleeing so repugnant, he shouted at Goldman, “John Wayne don’t run away!”

Twentieth Century Fox eventually bought the project for an impressive $400,000, beginning a production that would include Paul Newman learning bicycle tricks, both Jack Lemmon and Steve McQueen turning down the role of the Sundance Kid, and the immortalization of Goldman’s most important scene.

TCM points out that Goldman was influenced as a kid by the “stupid courage” he observed in films like “Gunga Din,” and notes the trait would eventually lead Goldman to write the now-famous cliff scene. Goldman said of that scene, “The jump off the cliff… has turned out to be the most important scene of my life. I can argue that everything good that has come out of my relationship with Hollywood was because of that scene.”

While “Butch Cassidy and the Sundance Kid” did go on to win four Academy Awards, the movie wasn’t the instant classic people remember it to be. Critics like Roger Ebert were anything but kind, saying things like, “The problems are two. First, the investment in superstar Paul Newman apparently inspired a bloated production that destroys the pacing. Second, William Goldman’s script is constantly too cute and never gets up the nerve … to admit it’s a Western.”

As a side note, it is interesting to point out the film today enjoys a Rotten Tomatoes score of 90%. Draw what conclusions you will concerning why modern movie critics disagree with critics of the time.

Outside of the film’s kudos, perhaps the most important contribution of “Butch Cassidy and the Sundance Kid” revolves around salad dressing and mountain resorts.

Both lead actors Newman and Redford named some of their greatest achievements after their respective characters. Redford, who purchased over 5,000 acres for his Sundance resort, used the property as a shining example of his commitment “to develop a little and preserve a great deal.”

As the resort’s website points out, Redford rejected advice “from New York investors to fill the canyon with an explosion of lucrative hotels and condominiums. Redford saw his newly acquired land as an ideal locale for environmental conservation and artistic experimentation.” Today, the nonprofit Sundance Institute continues to support independent filmmakers from around the globe.

Newman also found inspiration from the film when it came to causes close to his heart. Newman famously created his 100% for-charity food label, Newman’s Own, with the driving motto “Let’s give it all away.” As the organization’s website points out, “Paul Newman and Newman’s Own Foundation have given over $550 million to thousands of charities since 1982.”

Among those charities is Newman’s Hole in the Wall Gang Camp, named after the gang Butch and Sundance ran with in the Old West. The Hole in the Wall Gang Camp was created with a “different kind of healing” in mind, according to the organization’s website. Children, no matter their illness, are welcomed to the camp where they can, as Newman said: “raise a little hell.”

Is it worth watching today?

When watching “Butch Cassidy and the Sundance Kid” today, my advice is to forget about the accolades. Don’t look to this movie as an important film, or as some didactic life story demanding consideration. This is a movie that shines because of its simplicity and should be enjoyed with the same amount of energy as a lazy afternoon with a good friend.

As Catch Clarke of the Guardian noted, “(‘Butch Cassidy and the Sundance Kid’) is the mother of all buddy movies. Or should that be the father of all bromances?”

“Butch Cassidy and the Sundance Kid” is rated PG.